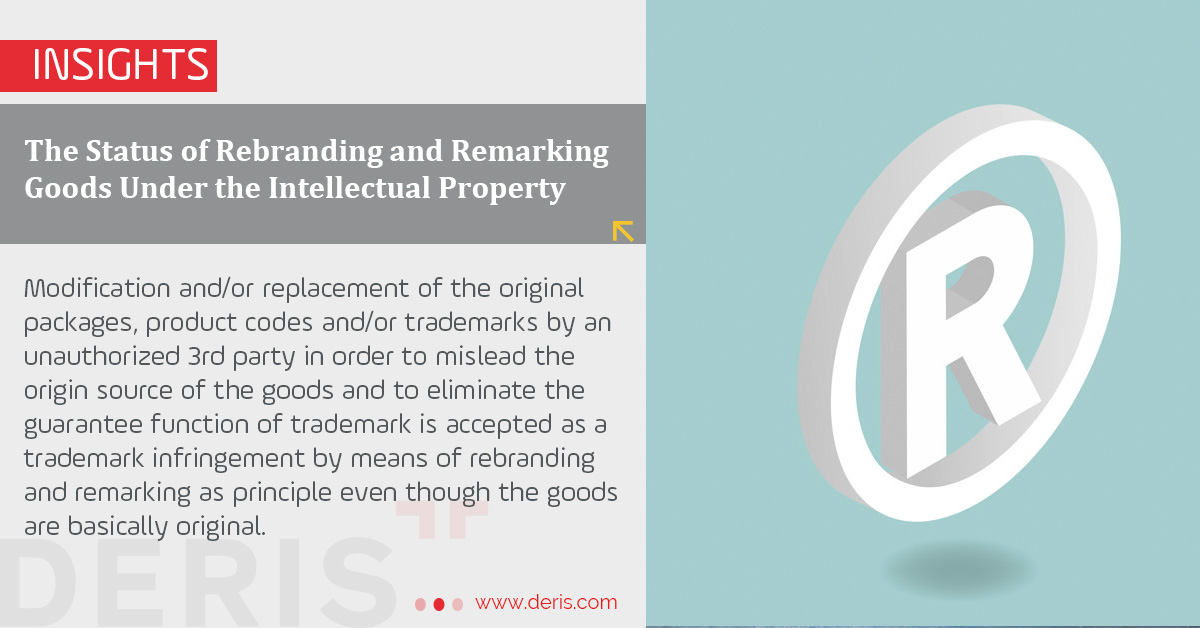 Modification and/or replacement of the original packages, product codes and/or trademarks by an unauthorized 3rd party in order to mislead the origin source of the goods and to eliminate the guarantee function of trademark is accepted as a trademark infringement by means of rebranding and remarking as principle even though the goods are basically original.

Are rebranding and remarking goods accepted within the scope of a common trademark infringement or counterfeiting under Turkish legislation?

According to the Intellectual Property Code ("IP Code"), trademark infringement is defined as using a same or an indistinguishable similar trademark of rights holder without consent of the proprietor.

The term "counterfeit" is not directly defined under the IP Code however under the Article 29, counterfeiting is explained as use of a trademark identically or indistinguishably similar with a registered trademark without consent of the proprietor of the trademark and selling, distributing, putting in commerce under any form, importing, exporting, keeping in possession for commercial purposes the goods carrying the infringed trademark where the person concerned knows or should know that the trademark is infringed.

Therefore, pursuant to the Turkish legislation, it can be said that using a registered trademark identically or indistinguishably similar on goods and/or services within the scope of registration without an authorization of the right holder is accepted as counterfeiting.

In this context, considering that rebranding/remarking is removing or modifying a trademark, original package and/or barcode/serial/lot code from original products without an authorization of a trademark owner under the IP Code, it is accepted as a specific form of trademark infringement but not counterfeiting since the products are not fake but modified. There is a fine line between to accept and not to accept these acts as trademark infringement since the IPR infringement cannot be claimed once the products are released to the market unless there is a modification or impairment by third parties with commercial purposes. It is also essential to underline that as Turkey accepts international exhaustion regime; the term of market is not limited with the Turkish market.

What are the legal consequences of remarking under the IP Code?

According to the Article 152 of IP Code;

(2) A trademark holder shall have the right to prevent the commercial use of the products within the scope of the provision of paragraph one through modification or impairment by third parties.

As an example, to the Supreme Court’s precedent (11th Civil Chambers of the Supreme Court, Case No.2004/12166, decision of November 11,2005 No. 2005/11433), the plaintiff filed a civil action for determination of trademark infringement based on the grounds that the defendant removed manufacturing codes form the original products.

The Local Court has stated that although the principle of exhaustion rights is accepted under the Turkish legislation, the trademark owners have right to prevent to third parties who modified or impaired the original product with commercial purposes. Therefore, the Court accepted that defendant’s actions constitute trademark infringement since the acts of the defendant causes misleading impression over the genuine origin of the products and removes the guarantee function of the trademark. The Supreme Court has upheld this initial decision.

On the other hand, according to the Supreme Court’s another precedent (11th Civil Chambers of the Supreme Court, Case No.2016/11969, decision of July 07, 2018, No. 2018/5029), on the subject; the plaintiff has filed a civil action for determination of trademark infringement and unfair competition based on the grounds that defendant removed serial/batch numbers of original products during parallel importing and the Supreme Court accepted  the plaintiff's claims specifically on the basis of three products which did not include serial/lot codes although it has been indicated that the serial/lot codes are written at the behind of the package/product.

The Supreme Court indicated that pursuant to the (repealed)Article 13 of Decree-Law No. 556 on the Protection of Trademarks (repealed) and now replaced with Article 152/1 of IP Code (in effect)- actions related to products subject to industrial property right protection will be out of scope once such products are released to the market by the right holder or by authorized third parties. Therefore, the plaintiff’s trademark infringement claims cannot be accepted for the products including new serial/lot codes which have been placed by the defendant during the parallel importation without any purpose to gain unfair price advantage by means of unfair competition and impairment of the trademark.

However, during the parallel importation, it has been determined that there were no serial/lot codes specifically on the three products even though it has been indicated that the serial/lot codes are written at the behind of the package/product. The Supreme Court has accepted the existence of impairment and by this mean infringement of the trademark since the acts of the adverse party can cause a misleading perception over the origin of the products and thereby the damage of the notoriety of the trademark.

On the other hand, Article 30/2 of the IP Code provides that those who remove without authority the sign indicating a trademark right rightfully placed on a product or on its packaging shall be sentenced to imprisonment from one year to three years and judicial fine up to five thousand days. The IP Code entitles the trademark owner to file a criminal complaint in case the trademark is removed without any authorization specifically.

In conclusion, the remarking is accepted as a specific form of infringement but not as straightforward counterfeiting   since the rebranded and remarked products continue to be genuine products.

The trademark owner is entitled to prevent the modification or an impairment of the goods without any authorization,  since said activities can be deemed within the scope of trademark infringement and unfair competition especially due to the fact that the function of the trademark to identify/guarantee the source/origin is damaged.