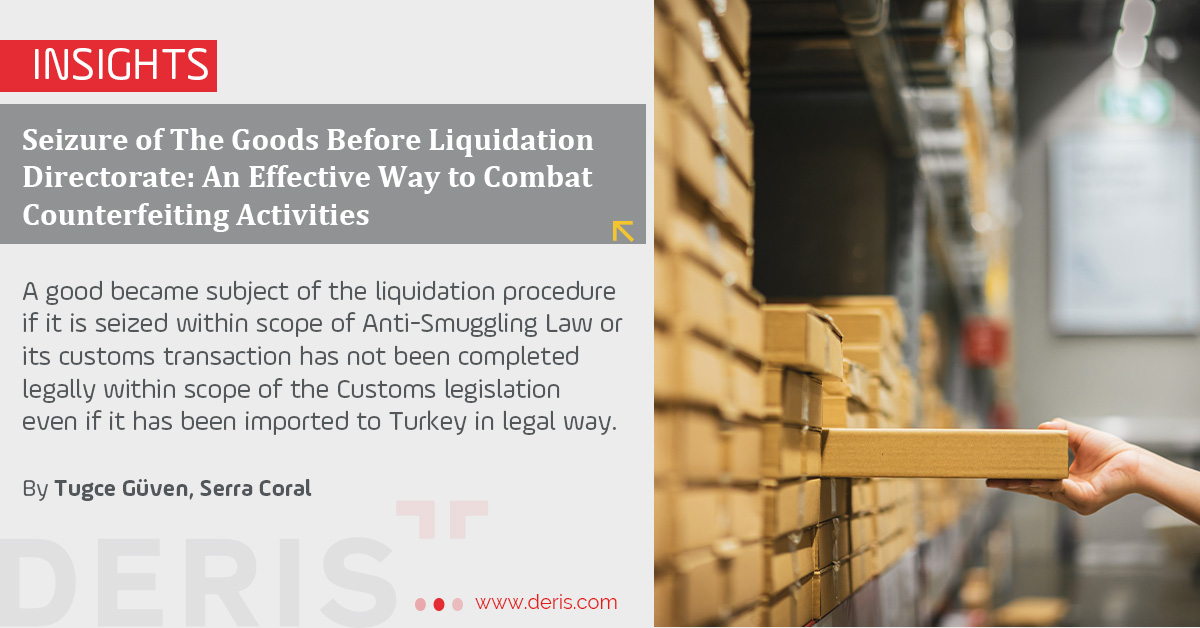 Seizure of The Goods Before Liquidation Directorate

Customs Regulation in Turkey entitles the IP right holders to file an online centralized application before the Customs for the monitoring of the counterfeiting activities at the borders. Such applications for the monitoring of registered trademarks and counterfeit goods shall be filed before the General Directorate of Customs an official body under the Ministry of Commerce.

In situations where the Customs suspends the release of the suspected goods on trademark infringement whether upon the application of the IP right holder or ex-officio, the IP right holders have right to file Criminal complaint or ask for preliminary injunction to prevent the release of the goods and secure the seizure of the goods before the Customs until the end of the Court proceedings.

However, in some cases, the IP right holders would not have chance to act against the counterfeiting activities if the goods are smuggled and those smuggled goods are suspended by the customs officers or the police forces ex-officio within scope of the Anti-Smuggling Laws. In such cases, the custom authorities or the police suspend the smuggled goods by virtue of the Anti-Smuggling Law and the Public Prosecutor initiates the criminal proceedings on smuggling. In cases where the smuggled goods are also counterfeits, IP right holders are not systematically informed of these cases and the criminal case will proceed only on grounds of smuggling provisions totally submitted to another regime in relation to the faith of the seized goods and may result to the release or reselling of the goods at the end of the proceedings.

Within the scope of the criminal action initiated on Anti-Smuggling Law, the Court orders “confiscation” of the smuggled goods upon finalization of the Court action and the goods become subject of the liquidation procedures. In Turkey, a good became subject of the liquidation procedure if it is seized within scope of Anti-Smuggling Law or its customs transaction has not been completed legally within scope of the Customs legislation even if it has been imported to Turkey in legal way.

In such case, the Directorate General of Liquidation (known as “TASIS” in Turkey) may sell the goods -even if the goods are counterfeit- through its tender or e-tender system by virtue of the Liquidation Regulation.

The IP right holders are entitled to stop the selling of the counterfeit goods through TASIS if they are aware of the suspended goods before TASIS and file the necessary complaints on the basis of trademark infringement in due time.

Here, the important question is how the IP right holders may aware of the counterfeit goods suspended before TASIS?

The answer is simple; it is possible to record the IP rights before TASIS in order to be informed of the liquidation decisions covering a relevant IP Right and request the notification before offering the goods for sale. In addition, it is also possible to check e-tender system of TASIS and follow up the counterfeiting goods in order to take the necessary measures in due course and prevent that counterfeit goods are introduced in the market.

The goods are mainly sold through e-tender system of TASIS open to the general public. Furthermore, today TASIS has five retail sale offices[1] at four different districts; two of them in Istanbul, one is in Edirne, one is in Ankara and one is in Kocaeli which are open to public.

In a past case, upon complaint of the IP Right holder, we managed to timely stop the tender for 985 pcs. of counterfeit watches which was supposed to be available for sale within 18 hours through the e-tender system. The IP Right holder had chance to stop the sale of counterfeit watches before the beginning of the tender through the close follow up of the e-tender system and immediate action taken on the basis of trademark infringement before the criminal courts. The counterfeit goods are now still suspended before TASIS as per the Court’s seizure order and the goods will be probably destructed upon finalization of the criminal court action.

In the situation where TASIS suspends the sales of the goods upon recordation of the IP right, the procedural way is the same with the border detention; it is mandatory for the right holder to institute an infringement action and obtain from the Court an order for preliminary injunction or to file complaint petition before the Public Prosecutor and obtain from the Court of Peace a seizure warrant within the given deadline in order to keep the continuance of the goods until finalization of the action.