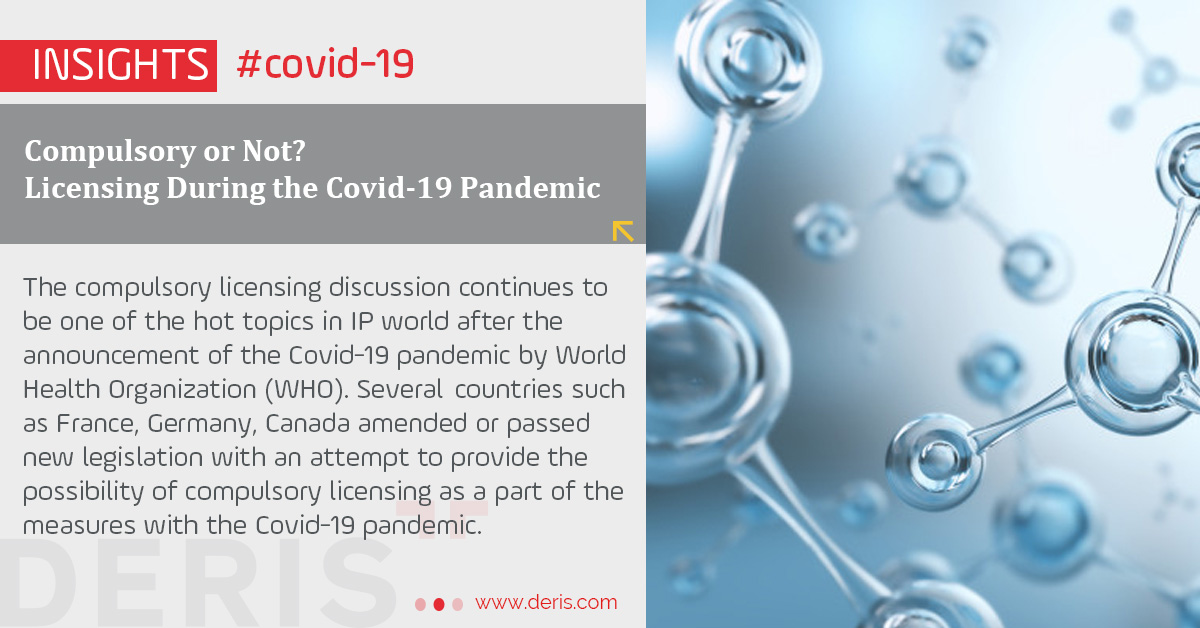 Compulsory or Not? Licensing During the Covid-19 Pandemic

The compulsory licensing discussion continues to be one of the hot topics in IP world after the announcement of the Covid-19 pandemic by World Health Organization (WHO).

Several countries such as France, Germany, Canada amended or passed new legislation with an attempt to provide the possibility of compulsory licensing as a part of the measures with the Covid-19 pandemic.

Israel was the first Country to approve a compulsory license for the importation of the generics of AbbVie’s patented Kaletra® medicine from India for use in the treatment of Covid-19 disease.  AbbVie however announced that it will not enforce its patent rights for Kaletra® medicine.

Gilead, a research-based biopharmaceutical company, announced that it will rescind its Remdesivir orphan drug designation before the Food and Drug Administration (FDA).

Another announcement was made by Medtronic by which the firm declared that it will make its design rights and the specs concerning the (PB) 560 portable ventilator available to the public.

Turkey is also one of the countries facing the Covid-19 pandemic with 120,204 confirmed cases by April 30, 2020. Although the Official Authorities have so far not made any public announcement concerning a possible compulsory licensing, Turkey can still be a part of a potential compulsory licensing discussion.

Is there any legislative basis for the compulsory licencing in Turkey?

The response should absolutely be affirmative according to the Industrial Property Code 6769 (IP Code) which entered into force on January 10 2017 by repealing the decree-laws on patents, utility models, trademarks and service marks, industrial designs and geographical indications which were in force since 1995.

The compulsory licensing provisions were indeed existing in the repealed legislation and now regulated between Articles 129 – 137 of the IP Code with some changes and additions.

Art. 129 mentions six grounds on the basis of which compulsory licenses may be requested and granted:

The IP Code provides the possibility to implement the compulsory licensing provisions during the Covid-19 pandemic especially in the existence of Public Interest (Art 132) and the TRIPs Agreement (Additional Art. 31bis) which is referred under Art. 129/ç.

Compulsory license based on public interest

Art. 132 of the IP Code clearly states that the Turkish Presidency (formerly the decision was rendered by Council of Ministers) is entitled to grant a compulsory license in cases where;

The compulsory license which is granted on grounds of public interest can be an exclusive license depending the circumstances. In case a compulsory license is granted, the licensee has no right to grant sub-licenses or import the subject-matter of the patent. However, the IP Code allows the subject-matter of the patent to be imported only when the licensee is explicitly authorized in the compulsory license. In such cases, the IP Code requires the authorization to import to be issued on a temporary basis and limited to meeting the demand.

The compulsory license can be granted under specific conditions by taking into consideration the term, fee and field of use. The economic value of the patent is taken into consideration when determining the fee. The IP Code provides the possibility to ask for a license fee reduction should the patent holder violates the mutual trust and confidence with respect to during the licensing of the patent.

Turkey has been a member of WTO and a party to TRIPS agreement since 1995.  As referred above, the IP Code does also contain a provision concerning the most recent amendment of the TRIPS agreement namely to Art. 31bis of the Agreement which was a continuation of the Doha Declaration.

By being a party to the amended version of the TRIPS Turkey is also entitled to grant compulsory license for the exportation of pharmaceutical products for addressing public health needs in other countries.

As for the determination of the fees for a compulsory license in case of Art. 31bis of the TRIPS, the IP Code provides an additional specific provision by stating that, the economic value of the use in terms of the importer country shall be regarded by taking into consideration the non-commercial and humane purposes.

How frequently is the compulsory licensing used in Turkey?

The compulsory licensing has been so far a very rare mechanism used in the Turkish practice. So far to our knowledge there is only one dispute which has been amicably solved before the court during the time when the repealed Decree Laws were in force (between 1995- 2017). However, the fact that the current IP Code provides more possibilities and has a broader wording for asking a compulsory licensing, is expected to the increase the compulsory license disputes.