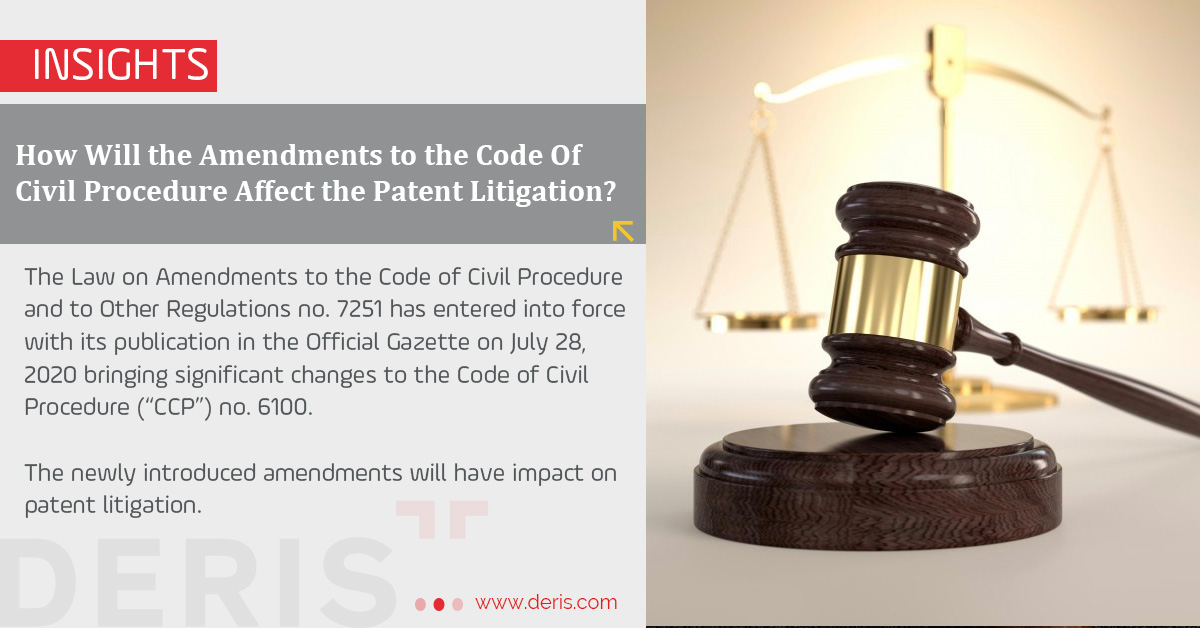 How Will the Amendments to the Code Of Civil Procedure Affect the Patent Litigation?

The party which does not comply with the preliminary injunction decision can be sentenced up to 6 months imprisonment.

The CCP used to involve a provision (Art. 398) sentencing individuals not complying with the execution order of the preliminary injunction (PI) or acted against the PI decision to a disciplinary imprisonment until November 20, 2019,

The Constitutional Court however decided that the provision goes against the principle of legal certainty and the right to appeal, and therefore cancelled the relevant provision. You may find our article on cancellation of Art. 398 of the Procedural Code hereunder.

The lawmaker enacted a new provision with the Law no. 7251 in compliance with the decision of the Constitutional Court.

Accordingly, individuals who do not comply with the execution order of the PI or act against the decision of PI can be sentenced to a disciplinary imprisonment for up to 6 months.

PI decision should be implemented within one week as of the notification of the PI decision.

Before the amendment to Article 393/1 of the CCP, the one-week deadline to execute the PI decision used to start from the issuance date of the PI decision. In practice, this short time involved risks for the party who was not notified of the PI order, especially in relation to deposit of the guarantee payment timely to initiate the execution.

Parties may request time extension to submit their objection to the expert report.

The former wording of the Art. 281/1 of the CCP used to grant the parties an inextensible two weeks period in order to object to the expert report. With the amendment introduced by the Law no. 7251, the parties can now request a further extension of two weeks to submit their objections.

This provision has special importance for complex patent litigation cases since the subject matter of the lawsuit is always technical and requires time to prepare a through objection.

Parties may request to attend the hearing virtually.

With the amendment to Article 149, the CCP adapts to the circumstances caused by the COVID-19 pandemic and introduces broader use of virtual hearings. The parties and their attorneys can attend the hearing virtually upon their request.

The court can also decide, ex-officio or upon the request of one of the parties, to hear witnesses, experts or private experts virtually.

Before the amendment, the CCP used to allow the parties to attend the hearing virtually provided that both parties consented to the proceeding.

The parties may request additional decision for the claims which have not fully been or partially addressed in the verdict,

A new article is added to the CCP, namely Art. 305/A, which is as follows: “Each party may request an additional decision on the matters that the court did not decide fully or partially, although such matters were asserted during the legal proceedings or should have been considered by the court ex-officio within one month as of the notification of the motivated decision. Parties may appeal the court’s additional decision.”

This addition to the CCP is of importance for patent litigation matters. The patent holder usually asks the Court for several claims such as the permanent injunction, compensation, seizure and destruction of products.  According to the former legislation any missing claim which has not been addressed at the verdict by the first instance court could have only been amended upon an appeal. The new amendment by providing the possibility to the first instance Court to amend its ruling will likely avoid the lengthy procedure for amending the issues which have not addressed by the Court.