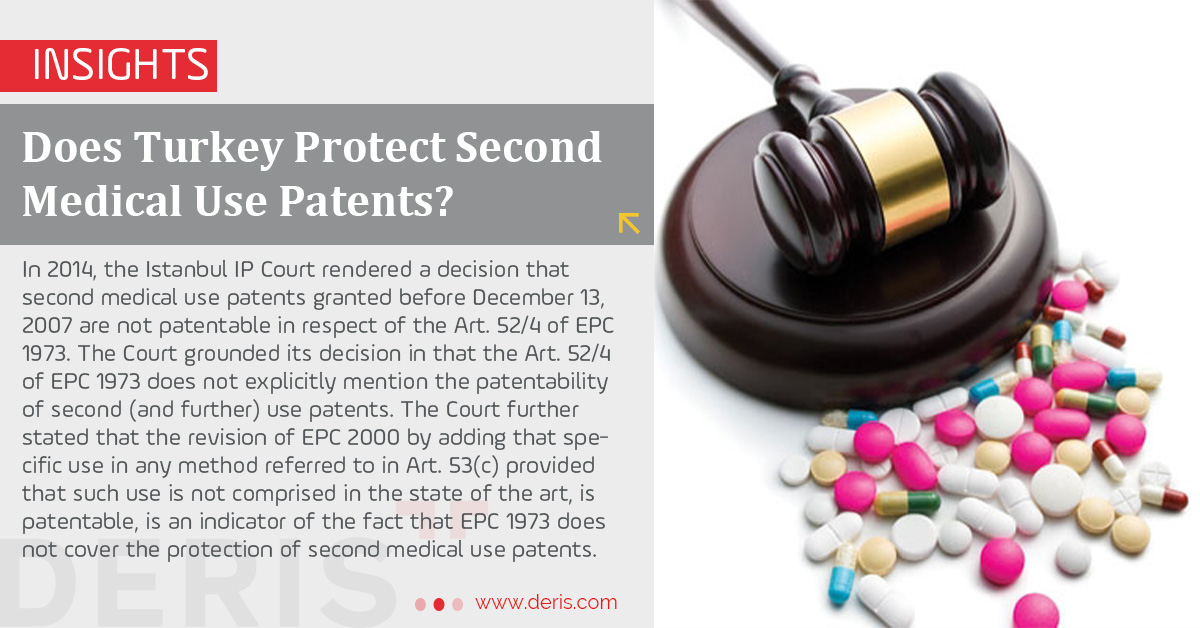 In 2014, the Istanbul IP Court rendered a decision that second medical use patents granted before December 13, 2007 are not patentable in respect of the Art. 52/4 of EPC 1973. The Court grounded its decision in that the Art. 52/4 of EPC 1973 does not explicitly mention the patentability of second (and further) use patents. The Court further stated that the revision of EPC 2000 by adding that specific use in any method referred to in Art. 53(c) provided that such use is not comprised in the state of the art, is patentable, is an indicator of the fact that EPC 1973 does not cover the protection of second medical use patents.

The First Instance Court insisted on its previous ruling and further added that the member countries are not bound with the Enlarged Board of Appeal decisions which are referenced in the articles of EPC 1973.

The G5/83 decision of the Enlarged Board of Appeal is referenced in Art. 52 and Art. 54 of EPC 1973. In the G5/83 decision, it has been decided that the use of a known substance or composition for the manufacture of a medicament for a specific new and inventive therapeutic application is patentable.[1]

Therefore, the First Instance Court, stated that the Enlarged Board of Appeal decisions are not binding to member countries.

So, is this really the case for Turkey?

The decision of the First Instance Court is now waiting to be evaluated by the General Civil Chamber of the Supreme Court.

Status of Second Medical Use Patents According to the Current Legislation in Turkey:

The Industrial Property Code No.6769 (“IP Code”) entered into force in Turkey on January 10, 2017 which introduced many changes including the patentability of second medical use patents.

Art. 82 of the IP Code stipulates patentable inventions and exceptions to patentability. Paragraph 6 of this article reads that products, particularly substances and compositions used in any therapeutic methods including diagnostic methods and surgical methods to be applied on human or animal body are patentable. Thus, the law in force uses the same wording as in Art. 53(c) of EPC 2000.

Despite there is no explicit provision for the protection of second (and further) medical use patents as in Art. 54/5 in EPC 2000; there are no provisions in the IP Code excluding these patents from being patentable.

Second medical use patents have been accepted as patentable by The Office (TürkPatent) even at the time of the Decree Law No. 551 Pertaining to the Protection of Patent Rights.

TürkPatent has always accepted the validation of international second medical use patents designated to Turkey apart from the fact whether they are granted before December 13, 2007 or not. National filings covering second medical use inventions have also been accepted by TürkPatent.

TürkPatent continues to its practice of accepting second medical use patents and treats these patents in accordance with the Art. 82 of the IP Code.

In our opinion, the General Civil Chamber of the Supreme Court shall acknowledge the will of the Parliament to include the decisions of the Enlarged Board of Appeal. Therefore, EPC 1973 shall be implemented together with reference decisions and second medical use patents should be protected.

Since there are no exclusions to the protection of second medical use patents in the IP Code, they should be protected in Turkey as long as they are novel and include inventive step.