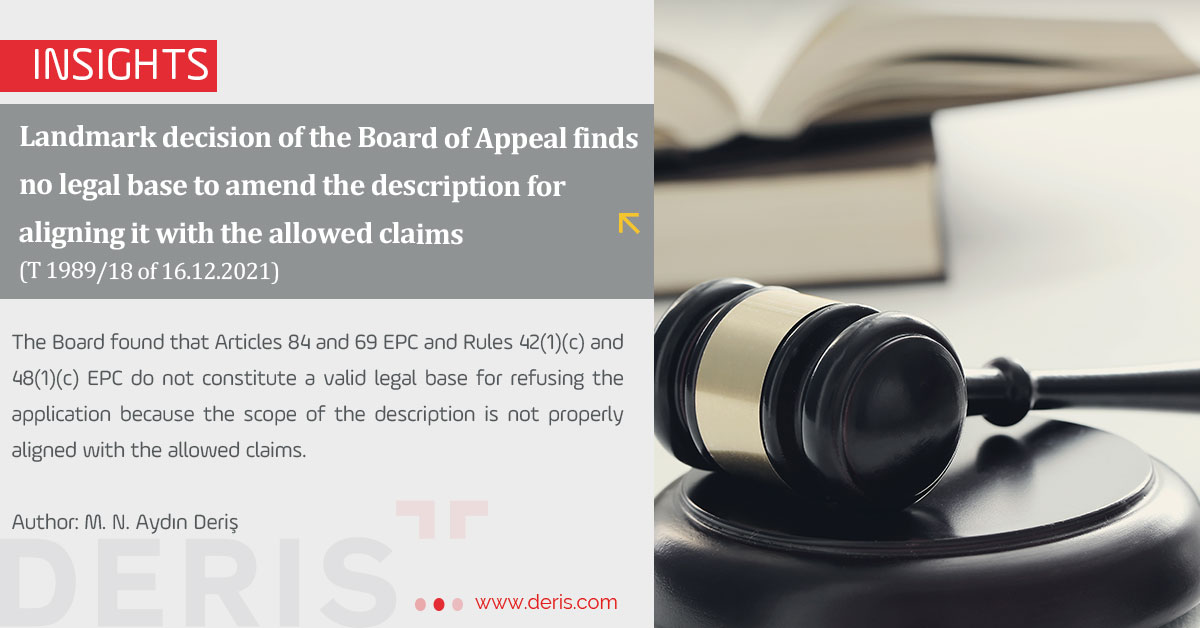 Landmark decision of the Board of Appeal finds no legal base to amend the description for aligning it with the allowed claims (T 1989/18 of 16.12.2021)

Landmark decision of the Board of Appeal finds no legal base to amend the description for aligning it with the allowed claims (T 1989/18 of 16.12.2021)

The appeal was filed against the decision of the examining division refusing the application because it considered that the scope of protection was unclear following the amendments to the description after the claims have been allowed.

The Board found that Articles 84 and 69 EPC and Rules 42(1)(c) and 48(1)(c) EPC do not constitute a valid legal base for refusing the application because the scope of the description is not properly aligned with the allowed claims.

In respect of Art. 84 EPC the Board reasoned that “Claims must be clear in themselves when being read with the normal skills including the knowledge about the prior art, but not including any knowledge derived from the description of the patent application or the amended patent (see e.g. decision T 454/89, Reasons, point 4.1 (vii)).”

In respect of Art. 69 EPC the Board further reasoned that “When assessing clarity, Article 69 EPC is of no relevance since it is only concerned with the extent of protection conferred as one of the effects of an application or patent (chapter III of the EPC) whenever that extent is to be determined by whoever is competent to do so. Article 69 EPC is not by itself concerned with a requirement of the Convention to be met by an application or patent - in particular, unlike Article 84 EPC it is not concerned with the definition proper of the subject-matter sought to be protected by a claim. Moreover, even if it were possible, for the purpose of Article 84 EPC, to interpret the claims in the light of the description and drawings as provided for in Article 69 EPC in order to establish whether the conditions governing clarity have been satisfied, the board fails to see how that approach could lead to a lack of clarity of the claims (as opposed to a lack of clarity of the description) if the clear terms of the claims did not encompass subject-matter disclosed in the application or patent.”

The Board rules that “Thus, Article 84 EPC cannot serve as a legal basis for the refusal.”

The Board notes that “As per Rule 42(1)(c) EPC (Rule 27(1)(d) EPC 1973 and Rule 27(1)(c) EPC 1973, before and as of 1 June 1991, respectively) the description shall disclose the invention, as claimed, in such terms that the technical problem, even if not expressly stated as such, and its solution can be understood, and state any advantageous effects of the invention with reference to the background art. In line with the concept of a technical invention on which the EPC is founded, the first half-sentence requires the description to disclose how the invention can be understood as the solution to a technical problem. However, in the absence of an objection of lack of unity under Article 82 EPC, the board fails to see how the above-mentioned provision could be the legal basis for requiring the applicant, as a general rule, to bring the description in line with claims intended for grant, and to remove passages of the description that disclose embodiments which are not claimed.

“9. The board has also considered Rule 48(1)(c) EPC (Rule 34(1)(c) EPC 1973) as a possible legal basis requiring the adaptation of the description. Under Rule 48(1)(c) EPC, a European patent application shall not contain any statement or other matter obviously irrelevant or unnecessary under the circumstances. According to both the wording and history of this provision, it is concerned not with the contents of granted patents but with patent applications. The introductory sentence makes reference to European patent applications as opposed to the contents of the description as in Rule 42 EPC.”

To conclude it can be said that the decision is expected to have an important effect on the practice as the applicants and their attorney are likely to rely on it for opposing the examiners’ requests for aligning the description to the claims and for appealing the decisions of refusal based on such grounds.

As for the EPO Guidelines it is thought that they will have to reflect the conclusions of the decision to the practice.