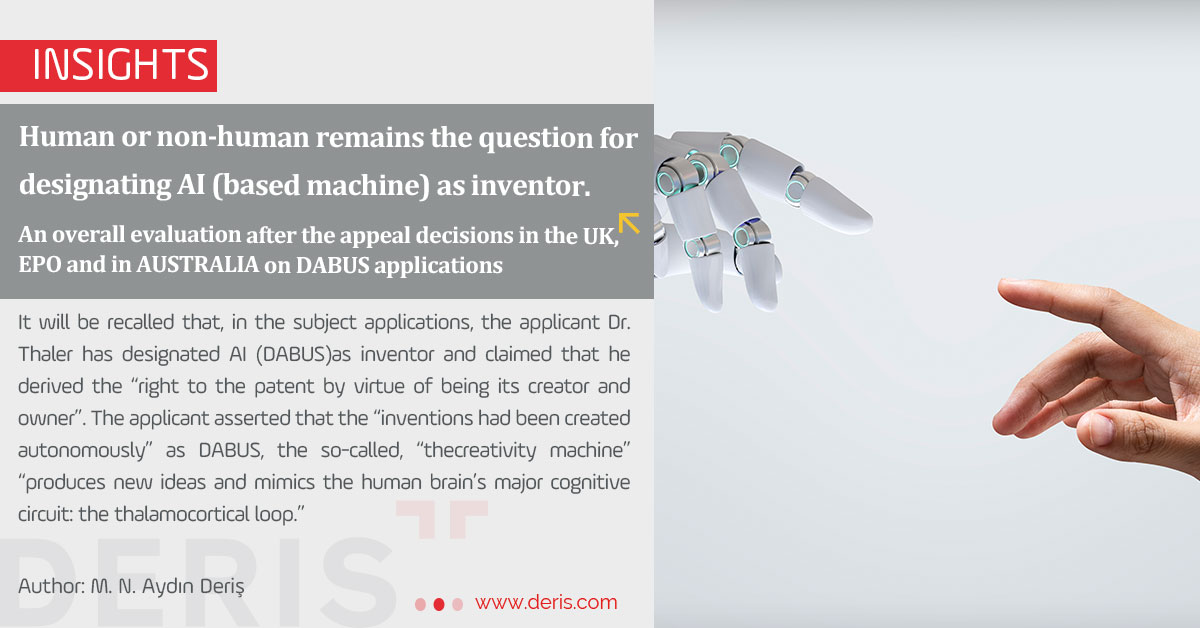 Human or non-human remains the question for designating AI (based machine) as inventor. An overall evaluation after the appeal decisions in the UK, EPO and in AUSTRALIA on DABUS applications

It will be recalled that, in the subject applications, the applicant Dr. Thaler has designated AI (DABUS)as inventor and claimed that he derived the “right to the patent by virtue of being its creator and owner”. The applicant asserted that the “inventions had been created autonomously” as DABUS, the so-called, “the creativity machine” “produces new ideas and mimics the human brain’s major cognitive circuit: the thalamocortical loop.”

South Africa, where there is no formal examination, was the first country where a patent was granted to the applicant as the owner of the AI machine which was designated as inventor.

The applications, filed in several jurisdictions, were objected in the USA, UK, EPO and in AUSTRALIA basically on similar grounds that the AI machine designated as inventor is not a “human”, “natural person”. After the decision of USPTO upholding the refusal of the applications in the USA, the appeals have also been dismissed in the UK and EPO but have been upheld in AUSTRALIA.

The USPTO decision held that “to the extent the petitioner argues that “an inventor” could be construed to cover machines, the patent statutes preclude such interpretation” noting that “Title 35 of US Code consistently refers to inventors as natural persons.” “For example section 101 states “Whoever” invents or discovers any new and useful process, machine, manufacture, composition of matter or any new and useful improvement thereof may obtain a patent therefor… “Whoever” suggests a natural person.” “Section 115 similarly refers to individuals and uses pronouns specific to natural persons –“himself” and “herself”—when referring to the individual who believes himself or herself to be the original inventor or joint inventor of a claimed invention in the application”. “It further states that the inventor who executes an oath or declaration must be “a person”. “Other sections of Title 35 take the same approach.”

The decision reasoned that “therefore interpreting “inventor” broadly to encompass machines would contradict the plain reading of the patent statutes that refer to persons and individuals.” “In addition, the US Court of Appeals for the Federal Circuit has explained that the patent laws require that an inventor be a natural person.”

In its decision the USPTO has also relied on case law referring to the decisions from the Federal Circuit according to which it is a statutory requirement that an inventor be a natural person and stating “… the Federal Circuit in an earlier decision, Beech Aircraft Corp. v. EDO Corp. stated that: “only natural persons can be ‘inventors.” The decision further reasoned that “while these Federal Circuit decisions are in the context of states and corporations, respectively, the discussion of conception as being a “formation in the mind of the inventor” and a “mental act” is equally applicable to machines and indicates that conception - the touchstone of inventorship - must be performed by a natural person.”

Further referring to the Manual of Patent Examining Procedure (MPEP) the decision notes: “(MPEP) follows the patent statutes and the Federal Circuit case law concerning inventorship, explaining that the threshold question for inventorship is “conception”. “The MPEP defines “conception” as “the complete performance of the mental part of the inventive act” and it is “the formation in the mind of the inventor of a definite and permanent idea of the complete and operative invention as it is thereafter to be applied in practice.” ‘’Again, the use of terms such as “mental” and “mind” in the MPEP indicates that conception must be performed by a natural person.”

In the cases appealed in the UK, EPO and in AUSTRALIA the questions are whether:

In its decision of 21 September 2021, the Court of Appeal dismissed the appeal of the applicant and ruled that only a human being can be designated as inventor and the language of the 1977 Act under Section 7 and other provisions, has no room for interpretation to designate as inventor nothing other than “the person who actually devised the invention”.

The Court of Appeal upheld the decisions of the UKIPO Comptroller and the High Court that applications were deemed withdrawn because no human inventor is named reasoning, in the words of LJ Arnold, “DABUS is legally incapable of being an inventor under the act”.

On the first point the judges were unanimous in their decision that, according to the language of the act, only a human can be designated as inventor.

On the second point, the decision was split 2 to 1 as LJ Briss disagreed maintaining that “the Comptroller has no role in adjudicating on the effectiveness of the claimed derivation of title” and that “the fact that the creator of the inventions in this case was a machine is no impediment to patents being granted to this applicant”, maintaining that the Act provides other means to address the entitlement to file the application.

Foreign decisions on DABUS applications were also briefly considered in the judgement of LJ Briss.

For the decisions in the US and EPO the judge found that “there is no need to examine these decisions because the law in the US is quite different but even in the EPO the legislative framework is not the same as the relevant parts of the 1977 UK Act.”

For the decision of the Federal Court of Australia the judge found that “the relevant legislation is quite distinct from that in the UK” and that “the applications reached the Australian Patent Office via PCT which meant that local rules applied which require that the applicant to provide the name of the inventor. That rule is in different terms from section 13/2 and the present case is not a PCT application. If it were then the operation of section 13/2 would be affected by a deeming provision”.

The judge considered that South African patent proceeded also through an application filed via the PCT route.

On the basis of this decision, unless further legislative changes, it appears that in the UK only a human would have to be designated as inventor, as a requirement for the grant of a patent.

According to the EPO Press Communiqué of 22 December 2021, in the cases J8/20 and J9/20 regarding the EP applications, the Legal Board of Appeal dismissed the appeal and upheld the refusal of EPO’s Receiving Section considering that

“On this point the Receiving Section considered that the statement in that the applicant was successor in title because they created and owned the AI machine did not satisfy the requirement of article 81 EPC in conjunction with article 60/1 as to the origin of the right to the title for lack of legal capacity on the part of the AI machine designated as inventor to transfer such title.”

The decision of the Federal Court of Australia may be considered as a landmark decision for being the first recognizing that patent can be granted on an application designating an AI machine as inventor and the derivation of title from it to validly file the application.

Like the other Offices, the Australian Patent Office rejected the patent applications on similar grounds. With its decision of 30 July 2021, the Federal Court overturned the patent office’s decision ruling that “generally, on a fair reading of ss 15(1)(b) and 15(1)(c), a patent can be granted to a legal person for an invention with an artificial intelligence system or device as the inventor.”

In the words of Justice Beach “an artificial intelligence system can be an inventor for the purposes of the Act” for the following reasons.

Justice Beach observing “as the word “inventor” is not defined in the Act or the Regulations it has its ordinary meaning” reasoned that “in this respect the word inventor is an agent noun” which “describes the agent that does the act referred to in the verb to which the suffix is attached” such as “computer, controller, regulator, distributor, collector, lawnmower, dishwasher are all agent nouns.”

The judge ruled that “Accordingly, if an artificial intelligence system is the agent that invents, it can be described as “an inventor.”

The judge justified the need for a broad interpretation of the word “inventor” reasoning that “a widening conception of “manner of manufacture” is a necessary feature of the development of patent law in the 20th and 21st centuries as scientific discoveries inspire new technologies, I see no reason why the concept of “inventor” should not also been seen in an analogously flexible and evolutionary way.”

The judge further reasoned that “the construction of the Act should be consistent with its object clause” (s 2A) and for this reason “the term inventor” should “be construed in a manner that promotes technological innovation and the publication and dissemination of such innovation by rewarding it, irrespective of whether the innovation is made by a human or not.”

On this point the judge observed that “machines have been autonomously or semi-autonomously generating patentable results for some time now. So and consistently with s 2A, you are simply recognizing the reality by according to AI the label of inventor.”

The judge reasoned that “nothing in the Act expressly refutes the designation of an AI machine as inventor” stating that “no specific aspect of patent law, unlike copyright law involving the requirement for a human author or the existence of moral rights, that would drive a construction of the Act as excluding non-human inventors.”

Regarding the issue of inventorship of an AI machine the judge ruled that “an inventor may be an artificial intelligence system, but in such a circumstance could not be the owner, controller or patentee of the patentable invention.”

After going at length on technical considerations on Artificial Neural Networks and the use of Artificial Intelligence in pharmaceutical research, and observing that “there is a distinction between automation and autonomy” the judge considered DABUS “to be semi-autonomous … although its output could be said in one sense to be autonomously generated” the judge stated “I accept for the present purposes … that DABUS could be described as self-organizing … generates novel patterns of information rather than simply associating patterns … is capable of adapting to new scenarios without additional human input … Further the artificial intelligence’s software is self-assembling … DABUS in one sense can be said to mimic aspects of human brain functions” thereby retaining DABUS” as the inventor of an AI-generated invention independently from human input as opposed to AI-assisted inventions generated with human input."

Differentiating inventorship from ownership the judge ruled that while an AI machine can be designated as inventor “only a human, or other legal person can be an owner, controller or patentee” further reasoning that “it is a fallacy to argue from this that an inventor can only be a human.”

The judge stating “given the permissive “may assign” in the statutory language, if you are an inventor who is a legal person then you can assign. But if you are not then you can not assign” ruled that “that does not mean that the “inventor” more generally under the Act can only be legal person” from which it follows that the AI machine does not need to be recognized as a “legal person” for the purpose of the applicant’s entitlement to file the application.

To conclude a couple of observations:

Lady Justice Laing seems to acknowledge this situation by stating in her judgment: “If the inventor is not a person, but a machine, no person has, as a matter of law, a right to apply for patent in respect of the machine's inventions. It is as simple as that. Whether or not thinking machines were capable of devising inventions in 1977, it is clear to me that Parliament did not have them in mind when enacting this scheme. If patents are to be granted in respect of inventions by machines, the 1977 Act will have to be amended.”

And a couple of modest considerations: