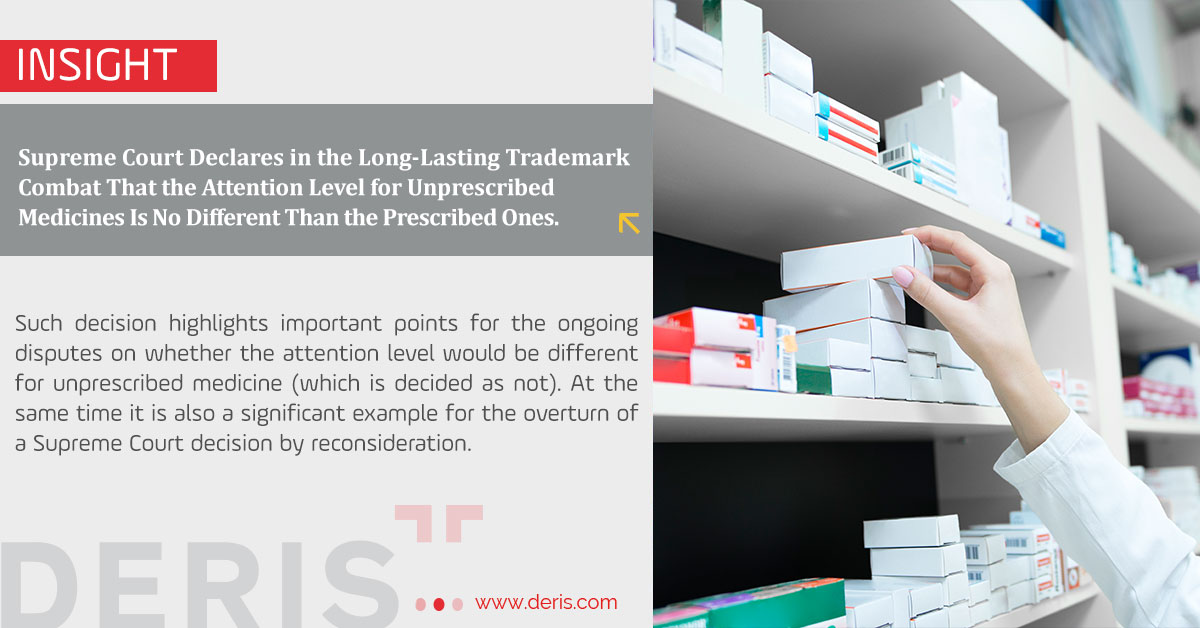 Supreme Court Declares in the Long-Lasting Trademark Combat That the Attention Level for Unprescribed Medicines Is No Different Than the Prescribed Ones.

Supreme Court Declares in the Long-Lasting Trademark Combat That the Attention Level for Unprescribed Medicines Is No Different Than the Prescribed Ones.

In the precedent, the plaintiff- owner of the “ZINCO” trademark covering the goods in class 05- filed a cancellation action against the Turkish PTO’s decision refusing its opposition to the latter application for “ZINCOBEST” covering class 05.

The First Instance Court decided that even though the plaintiff’s trademark “ZINCO” has low distinctiveness due to being used in various medicines as an active ingredient, the users may confuse or associate the trademarks “ZINCO” and “ZINCOBEST” in the event that the medicines under such trademarks are sold without prescription. Therefore, the court decided for invalidation of the defendant’s “ZINCOBEST” trademark.

The 11th Chamber of Supreme Court firstly approved the First Instance Court’s decision by stating that there would be a confusion risk between the trademarks of the parties. Right after, the plaintiff appealed to Supreme Court for the reconsideration of the decision.  Upon re-evaluation of the decision, the Supreme Court decided that revise its decision and stated that since the plaintiff’s “ZINCO” trademark is indeed the name of an active ingredient commonly used in various medicines, the expert users such as doctors, pharmacists could differentiate the trademarks of the parties, thus there would not be a confusion risk between the same.

Overturning of a Supreme Court decision by reconsideration is quite rare in Turkish practice, as the same chamber of the Court re-examines their previously rendered decision.

At the last step, Supreme Court Assembly of Civil Chambers approved such decision by declaring that the plaintiff’s trademark “ZINCO” has low distinctiveness for pharmaceutical preparations   as it refers to a common active ingredient and accordingly the owner of such trademark should tolerate similar trademark bearing such term.

It was stated in the decision that since the unprescribed medicines are also directly related to human health, the attention level of the buyers for these goods would still be much higher than the level of attention they show when buying an ordinary product. In addition, it was also stated that even the unprescribed medicines are sold in pharmacies and should be directed to consumers by a pharmacist as these cannot be directly bought on the shelves as in supermarkets. Thus, it was declared by Supreme Court Assembly of Civil Chambers that there would not be a confusion risk between the trademarks “ZINCO” and “ZINCOBEST” for pharmaceutical preparations, regardless of being sold with prescription or not.

Such decision highlights important points for the ongoing disputes on whether the attention level would be different for unprescribed medicine (which is decided as not). At the same time it is also a significant example for the overturn of a Supreme Court decision by reconsideration.