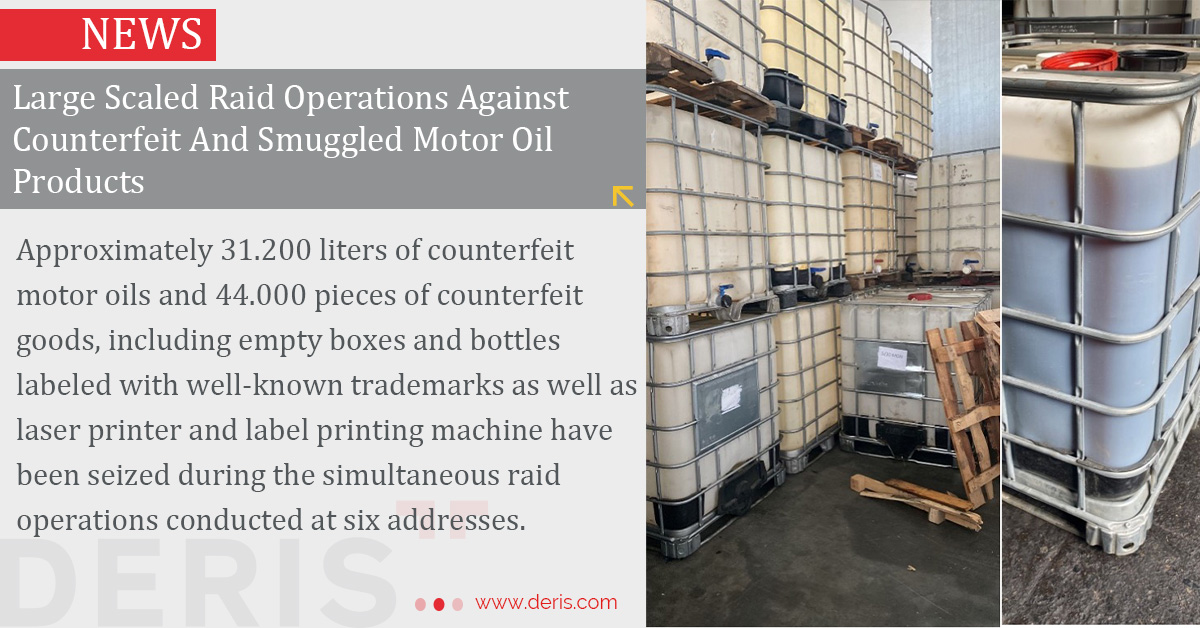 Approximately 31.200 liters of counterfeit motor oils and 44.000 pieces of counterfeit goods, including empty boxes and bottles labeled with well-known trademarks as well as laser printer and label printing machine have been seized during the simultaneous raid operations conducted at six addresses.

Our Anti-Counterfeiting team proudly announces that we successfully conducted simultaneous raid operations on behalf of several well-known motor oil brands with the collaboration of the Gendarmerie Crime Investigation Team (JASAT) against counterfeiters at 6 (six) locations in Istanbul. Following the raid operations, criminal proceedings are in progress against the four counterfeiters based on several charges, including the crime of establishing a profitable criminal organization and violating the Anti-Smuggling Law.

The raids were conducted in 1 production facility and 5 storehouses simultaneously in Bağcılar, Pendik, Bahçelievler and Başakşehir. The Gendarmerie Crime Investigation Team estimates that all the addresses are connected. The operations prevented the flow of enormous amounts of counterfeit motor oils into the market, which might be seriously harmful to vehicles and accordingly which will cause high number of financial damages. More importantly, counterfeit motor oils cause catastrophic accidents in traffic because of the lack of quality control which should be strictly controlled considering the importance of human life.

These raids have a significantly positive impact in terms of IP enforcement related to automotive parts considering that this has become an attractive market for counterfeiters since the rise of online market platforms, according to the recent reports of the EUIPO. [i]

Here are some photos taken at the raided locations below: