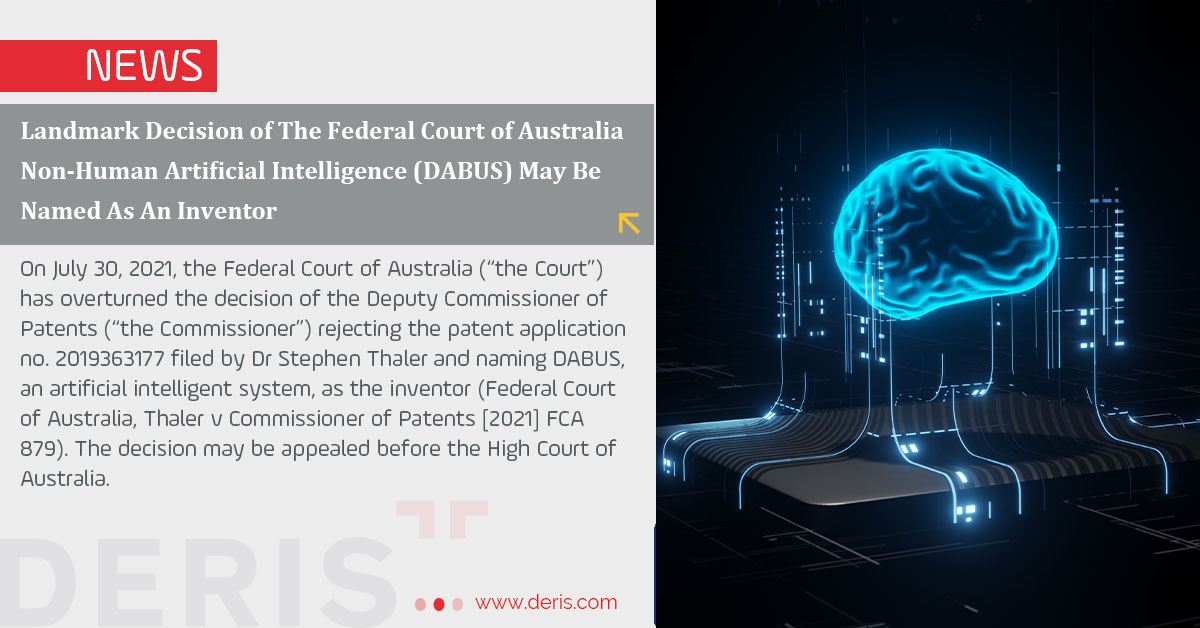 Landmark Decision of The Federal Court of Australia: Non-Human Artificial Intelligence (DABUS) May Be Named As An Inventor

From this point of view, the Commissioner decided that the Patents Act (1990) required a human inventor even if the invention made autonomously by an artificial intelligent system that satisfies patentability requirements.

The Federal Court has ruled to the contrary and acknowledged the inventorship of non-human artificial intelligence systems.

The Court observed that there is no definition of the inventor in neither the Patents Act nor the PCT.

Regarding the statement of the Commissioner, the Court reasoned;

“First, that position confuses the question of ownership and control of a patentable invention including who can be a patentee, on the one hand, with the question of who can be an inventor, on the other hand. Only a human or other legal person can be an owner, controller or patentee. That of course includes an inventor who is a human. But it is a fallacy to argue from this that an inventor can only be a human. An inventor may be an artificial intelligence system, but in such a circumstance could not be the owner, controller or patentee of the patentable invention.” (Federal Court of Australia, Thaler v Commissioner of Patents [2021] FCA 879, para. 12)

On such grounds, the Court concludes that inventors should not be limited only to humans when there are also no contrary provisions of law.

The Court further reasoned and found that the inventor is an ‘agent’ and the agent can be “a person or a thing”.

“In summary and for the following reasons, in my view an artificial intelligence system can be an inventor for the purposes of the Act. First, an inventor is an agent noun; an agent can be a person or thing that invents. Second, so to hold reflects the reality in terms of many otherwise patentable inventions where it cannot sensibly be said that a human is the inventor. Third, nothing in the Act dictates the contrary conclusion.” (Federal Court of Australia, Thaler v Commissioner of Patents [2021] FCA 879, para. 10)

The important take away of this decision is that the inventor being considered as an ‘agent’ would eliminate the need for recognising an artificial intelligent system as a ‘legal person’ for the purposes of ‘inventorship’ and from thereon of ‘ownership’ of the patent.

In the light of the evaluation and development of technology, many patentable inventions are not made by humans, the Court reasoned that the concept of inventor should rather be evaluated in more flexible and evolutionary ways.

Further, the Court reasoned that broadening the definition of ‘inventor’ will also serve the aim of the patent system by ‘promoting economic wellbeing through technological innovation and the transfer and dissemination of technology’ (The Patents Act (1990), Sec. 2A).

Related: The South African Patent Office Has Recognised “DABUS” As The Inventor