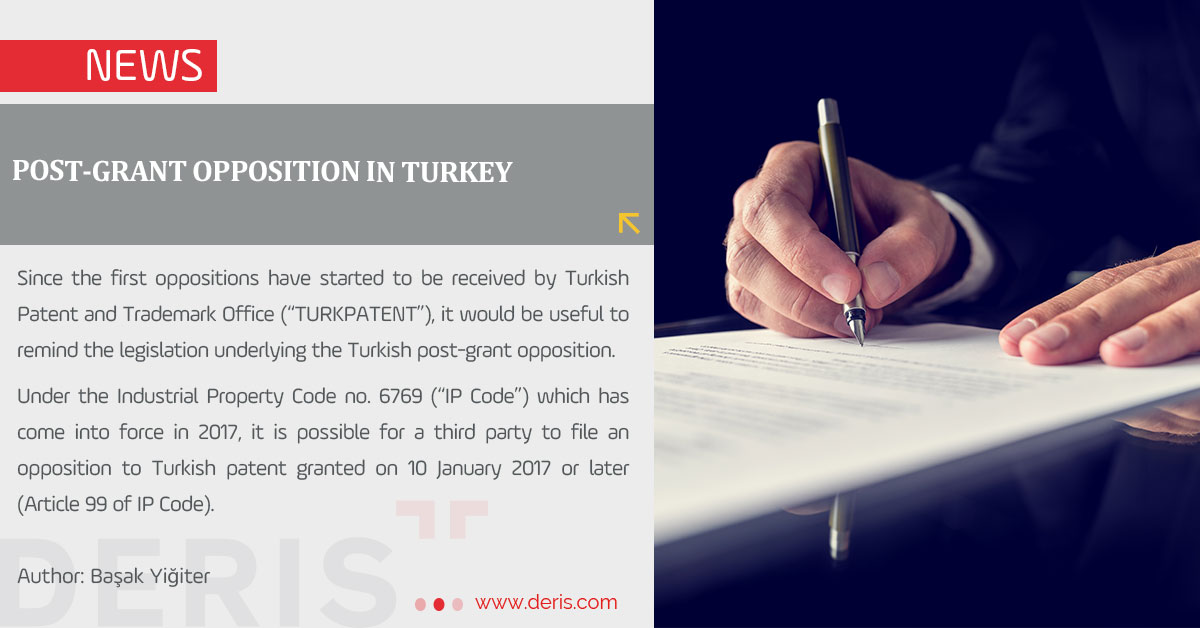 Since the first oppositions have started to be received by Turkish Patent and Trademark Office (“TURKPATENT”), it would be useful to remind the legislation underlying the Turkish post-grant opposition.

Under the Industrial Property Code no. 6769 (“IP Code”) which has come into force in 2017, it is possible for a third party to file an opposition to Turkish patent granted on 10 January 2017 or later (Article 99 of IP Code).

Who can oppose a patent?

Any third party may file an opposition to a granted Turkish patent. More than one person may file opposition against the same patent.

When can a patent be opposed?

An opposition can be filed within 6-month period after the publication of the grant decision in the Bulletin. No remedies (further processing or re-establishment of right) is possible for the missed period for filing an opposition. Oppositions which are filed later than that period will be rejected. Thus, after this period, the patent can only be challenged before the IP Court.

What needs to be filed to oppose a patent?

Within the opposition period,

Otherwise, the opposition shall not be deemed to have been filed.

What are the grounds of opposition?

The grounds of opposition are that:

At this point, it is necessary to open a parenthesis; requirements such as clarity and unity of invention are not grounds of opposition.

For the fees, it should be kept in mind that the most significant cost is for getting legal advice or engaging a legal representative. Thus, the likely overall cost would be much greater than official opposition fee.

Unlike EPO, oral proceedings (“hearing”) is not available before TURKPATENT.

Advantages of an Opposition

In addition, the opposition proceedings brought to the patent holder the freedom to amend their claims. Needless to say, the amendment may not extend beyond the content of the application or the patent. On the other hand, according to Article138(4) of IP Code, during an invalidity action, it is not possible to amend the claims of a granted patent. The Article only allows the cancellation of claim(s). Even partial cancellation of a claim is not possible. Accordingly, the advantage of opposition proceedings for the patent holder is beyond dispute. In that case, in order to increase their chance to revoke the patent, third parties may still prefer to challenge the patent by an invalidation action before the Court where the law ties the patentee’s hand and foot to amend his granted patent to save.