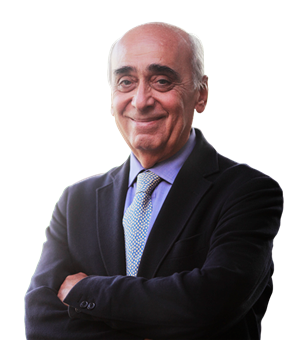 Mehmet Nazım Aydın Deriş graduated with first class honors from the Faculty of Law at the University of Geneva in June 1968. He is fluent in French, English, Italian and German and has a spoken command of Greek.

He has been an active member since the early 1980s of different commissions engaged in establishing the Decree-Laws of 27 June 1995 (repealed on 10 January 2017) concerning industrial property at the State Planning Organisation and the Ministry of Trade and Industry, preparing studies pertaining to diverse subjects to be submitted to the concerned commissions.

Upon the invitation of the Turkish Patent and Trademark Office (formerly named Turkish Patent Institute), he has participated to the work of the preparatory and assessment commission of the new Turkish Code of Industrial Property No. 6769 which has entered into force on 10 January 2017.

Mr. Deriş conceived, developed, and implemented proprietary software and the database for the management, follow-up, and search of industrial property rights.

He is now a member of FICPI and a member of the International Trademark Association (INTA), New York. He has prepared for over 10 years a summary of jurisprudence pertaining to Turkey since 1993 covering landmark court decisions regarding unfair competition/trademark protection, published in INTA’s Annual Review. He is member of the Pharmaceutical Trade Marks Group (PTMG) London, England, for whom he made two presentations at the symposiums held in Istanbul respectively 1992 on “Pharmaceutical Trade Marks in Turkey” and in October 2008 on “The situation of IP rights in relation to the European Union legislation and the outline of the IP environment in view of the continuing accession negotiations opened in October 2005 for the EU membership of Turkey”. The presentation of October 2008 was further submitted to the European Commission Directorate-General for Trade upon their request.

As a European patent attorney, between 2001 and 2007 Mr. Deriş has been a council member of EPI (the Institute of Professional Representatives before the European Patent Office) and is now a member of the EPPC (European Patent Practice Committee) and of the Litigation Committee.

As a long-time independent member of the International Association for the Protection of Industrial Property (AIPPI) he has been actively involved in establishing the AIPPI Turkish National Group in 2007 which was further developed into a legal entity under the name of “Association for the protection of intellectual property”, with approximately 180 members, of which he has been the first president for two terms until November 2010.

Mr. Deriş has also been actively involved in establishing the Turkish National Group of FICPI of which he has been an independent member for many years.